An unexpected illness meant that our Thanksgiving plans changed at the last minute. About a half hour before we would have headed to have a meal with the family, I learned that meal preparer was really sick but didn’t want to put us in a situation where we didn’t have a proper Thanksgiving meal. The sentiment was super sweet, and we decided to let her recover in peace. We would make our our feast.

Fortunately I had purchased a turkey breast on sale a week or two before. I pulled it out of the chest freezer, and DH2U started thawing it. Thank goodness for my canning pot, which was big enough so that we could submerge the whole bird in water to do it safely. Once it got thawed enough to remove the plastic, I learned that I hadn’t bought a single turkey breast like I thought, but rather the whole top half of the bird – only the legs were missing. What?!?!? I didn’t even know that was a thing!

While DH2U continued with his thawing miracle, I cooked up some cornbread, half of which turned into stuffing. The other half became a much needed snack. Over the course of the day mashed potatoes and gravy and fresh cranberry sauce also came about. DH2U’s mom, who is in town right now, had helped me roast some brussel sprouts to bring to the family feast, so those were reheated.

To me this was all no big deal – except that turkey getting thawed and fully cooked in time for a 7 pm sit down! To DH2U’s mom, however, I wear a cape. I like that idea, even if I don’t think I did anything spectacular.

Here was our final meal: 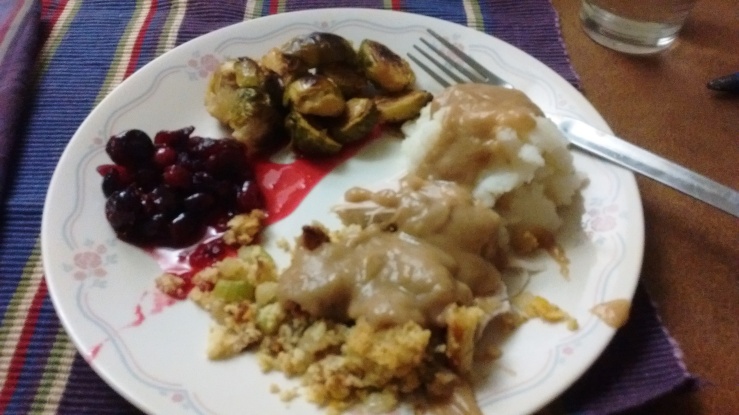 I had splurged on a pie from Father Joe’s Village’s culinary arts vocational school, whose 5K I had walked that morning, so our meal was complete, all without a trip to the store.

If it weren’t for my prepper tendencies, it would have been a very different situation. As it was everything turned out great, plus we still have some turkey leftover that I’m bringing for my lunch today.

So how was everyone else’s Thanksgiving? Anyone else have a ‘make it work’ kind of moment?