This past Sunday was the first performance of this year’s opera season. When I ordered the tickets, the dates hadn’t been released yet, and I was all excited to see a new-to-me comedic opera, The Daughter of the Regiment.

It wasn’t until about three weeks ahead of time that I realized the performance was on Superbowl Sunday. I was thinking that I would be the only person in the theatre who was in the intersection of opera lovers and football fans. 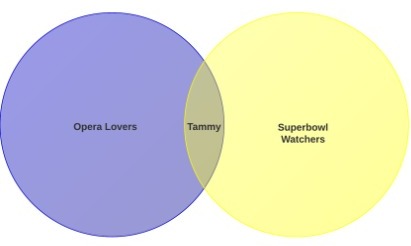 I do love football. The women in my family seem to be a lot more into the sport than the men. My love of the sport is the reason I went out and bought an antennae for my television. To date, that antennae has only been used to watch football (well that and political debates – another unlikely paring!).

Would knowing of the conflict have made a difference when ordering tickets? Heck no! While I would miss out seeing the commercials live, now that the internet gives us access to virtually everything, the best part of the game wouldn’t be missed at all.

The opera was delightful. It had some physical humor, some musical jokes (which fortunately for me were revealed in the pre-performance lecture or else they would have gone over my head), and I felt like an opera-going regular when I recognized part of the set as having been used for a performance I saw four years ago!

All of this did make me wonder how many other groups that I’m in would have only tiny overlapping circles. Blogging seems to have huge overlap with pretty much any circle. But what about archery and canning? Foreign films and Archer fans?

As we were all leaving the performance, someone announced the score of the game. Half the heads in the stairwell turned towards him and people were peppering him with questions. I guess those circles had a larger overlap than I thought!

What do you think are your most unusual overlapping spheres? or What was your favorite SuperBowl commercial?

This is a text widget. The Text Widget allows you to add text or HTML to your sidebar. You can use a text widget to display text, links, images, HTML, or a combination of these. Edit them in the Widget section of the Customizer.
%d bloggers like this: