“BEEP! BEEP! BEEP!” screeched the smoke detector at 2 am. I went from solidly asleep to flying out of bed before the second beep even started. 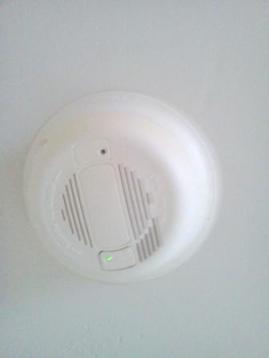 It only took a couple seconds to realize: 1) there was no smoke, and 2) in case of an actual fire, there is no way I’d be able to quickly scoop the cats up into their carriers because they were no where to be found.

From a previous middle of the night encounter with a screaming detector, I knew not to just take the battery out. Since mine are electrically powered with battery backups, removing the battery for more than a few seconds speeds up the beeping. This is exactly why I keep batteries on hand at all times.

I must admit to kicking myself for not changing out the batteries when my downstairs neighbor’s alarm went off the previous weekend. Wait a minute, why did his go off in the middle of the day on a weekend and mine always goes off at night during the week!?!?

I did feel fortunate that this did not happen when I was off on my snowy adventure. Poor kitties would have had hours of the torture before the cat sitter arrived.

Living through all this reminded me of the last time it happened … also at night. I blogged about it then, too, on Myspace. So here we go, back to the vault, from 2008:

I had a “welcome to home ownership” moment last night:  I’m laying in bed, just drifting off to sleep, when my smoke detector goes off.  Scared the bejeezzus out of me.  There is no smoke.  Then it suddenly stops.  I’ve never had electric smoke detectors before, so I grab a chair and go up for a closer look.  Nothing is obviously wrong with it.  I take the housing unit off and figure out how to get the battery out.  It then starts chirping every minute or so to tell me there is no battery in it.  Duhhhh!  So I dig through my boxes and find the 9 volt battery I knew I had and put it in.  Silence.  Aaaaahhhhhhh.  I lay down, start to get my heart rate back down … AND THE FRIGGEN THING GOES OFF AGAIN!!!!!!!!!!

So I throw on some clothes and drive up to Walmart (as an aside, why is Walmart full at 11 pm?) to get a fresher 9 volt battery.  Meanwhile I’ve texted Kurt to see if he is still awake.  He responds, and I call him to ask if he knows about the mystery of the bloody electrical smoke detector.  He recalls that there is some trick, he thinks it involves the button, but he is unsure.  I had looked at the button, but silly me, I’d actually read it, and it said “Press this button to test the alarm once a week”.  Had it said, “Press this button to make the damn noise stop,” I would have tried that first.

I make it home, change batteries (again) and press the button.  The alarm sounds.  Then quiet.  I laid in bed, but I was skeptical it was done.  After 20 minutes with no screaming alarms, I figured I was safe … and I was right.  Kurt was a G-dsend!

4 thoughts on “Back to the Vault”