In my post about the 18/40/60 rule, I came to the realization that I had been perceiving my attempts to learn a new skill as making a fool of myself. I thought about that for a good while after writing the post. Turns out, that wasn’t the first time I’d made that realization. It was on the eve of my first dance competition, and I posted it on Myspace. I guess what they say about having to hear something 4 times before it sinks in is true, even when I’m saying it to myself.

Things got more than a little overwhelming yesterday. First off, I’m still seriously jet lagged from my trip to Alabama, mainly because my sleep deprivation continues to deepen each day. Is it the weekend yet? In addition to that, I’m trying to buy a condo, and since I can only afford ones in pre-foreclosure I have to get my offers approved (or in my cases so far — declined) by the banks that hold the note. Plus, my first dance competition is a week from tomorrow.

Last night my dance partner and I didn’t even start training until 8 pm. I was exhausted to start with and had contemplated skipping it all together. We were going over the samba, and there is a move that I have not been able to get right since he taught it to me 3 months ago. I asked him if we could take it out of the routine for the competition. He told me if we took out everything I couldn’t do right, there would be no routine left.

I started to cry. He patted me on my back and said, “Oh, my little bridezilla. Is the stress getting to you?” I tried to explain it was because I was so tired. He brushed that off and then asked if I wanted to dance or cry. I told him I needed to finish crying first. He was cool with that.

Ultimately we ended up taking out the turn, mainly because I refused to follow that lead. (I am suspicious of him, however. I expect that turn to reappear in practice today.)

I finally got to bed at 11 last night only to be wide awake and very tired (strange combination) at 5 this morning. My poor brain couldn’t handle it, and all the stress was way too much. I got on the mental track that I was going to embarrass myself at the dance competition. I felt sorry for myself for about 10 minutes – never once considering not doing it, which makes me very happy in retrospect-  when I thought back to the competitions I had gone to as a spectator. Even the very beginning dancers with the very beginning dancer mistakes didn’t embarrass themselves. It was simply where their dancing was at the time. That allowed the pity party to end.

It was about to start up again as I realized driving in to work that I forgot to pack my breakfast. Right then and there I decided to treat myself and change the mood of the day. I stopped off at Starbucks and bought an apple fritter. 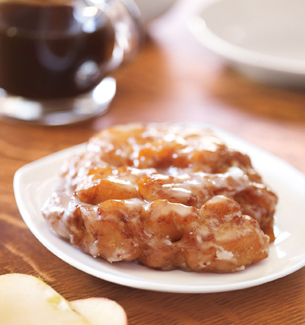 Bad for the diet, great for the mood. That plus a super-sized diet pepsi have me feeling much better and able to tackle the day (instead of being the one on the turf). Who’s to say that chemicals and trans fats are all bad?  🙂