I was all excited by this year’s First Line Literary’s prompts: Instead of having to use the one given, they have opened up their archives, and multiple previous prompts can be selected for each quarter.

I had decided I wanted to write a short story based on my third novel (which is still a work in process), thinking it would make it easier to get an agent and publishers interested in the full length version. I picked a first line that seemed appropriate and starting writing. I felt forced into the constraints. The story fell flat. I abandoned the idea, but most of that material can be incorporated into the novel, so nothing was lost there.

This is didn’t discourage me from the First Line prompts, though. I had a bare bones idea for a separate short story (literally just “Space Cowboy”), and I picked a new first line and my mind – and pen – were off to the races. I’ve now typed everything in and read through what I had in my first attempt. There are some continuity issues, and I realized it’s missing a few scenes to tie things together, but it has a strong ending and a protagonist I’m intrigued by. 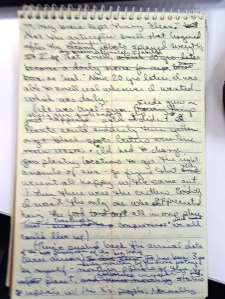 Hopefully this attempt at getting published, my third for this magazine, will be a success. The moral I learned from all of this was pushing my writing in a direction it doesn’t want to go is a waste of my time and annoys the characters. Now if I can only remember it for the next time!