I have avoided stepping into this particular confessional for a couple of years now, because it is going to cost me some street cred. But here I go: Some of the hugely popular movies of my lifetime I have either not liked or took pride in not seeing. What kind of geek/Gen X spokesperson am I?

There is one blockbuster film that I took great pride in not seeing: Titanic.

Way too much hype about the production and the swarms of teenage girls in line were just too much for me. Not only that, I’ve never found Leonardo DiCaprio to be attractive, so he isn’t a viable romantic lead for me.

I must admit, though, I almost watched some of it. When it first came out on video, it was on two VHS tapes. I’d been told that the second half was all the sinking footage. That interested me greatly, but to be able to say I’d never seen was more important. I stand by that decision.

In contrast to my Titanic “confession,” which was more of a brag, I’ve been so leery of this next revelation. I only ever saw the first three Star Wars films that were released (episodes IV-VI), and with a heavy heart I must admit that I only liked the first one.

The Empire Strikes Back was not a self-contained movie, an instant deal breaker for me. You don’t just stop a story mid-arc. No. Write a darned ending already! I was 9 when the film came out, and I went with Ma. I remember loving the film as I was watching it, and then all of a sudden the credits were rolling. I looked at Ma and said, “It can’t be over. It didn’t end.”

“Another movie will be coming out. The story will continue then.”

“But this one didn’t end!” I did go to the next film, but I never forgave George Lucas for that choice.

Why didn’t I like Return of the Jedi? My dislike that for that film was not tied to my disappointment in Empire. No, it was unique to the film. In a word: Ewoks. 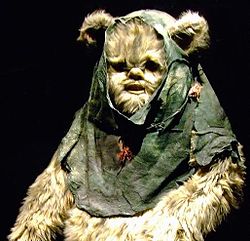 I’m slightly drawn to the latest installment because the original cast is back, but the force is too strong against it.

Have you ever taken pride in not seeing a highly popular movie? Or Does anyone else agree with me that movies should be self-contained?