Two weeks ago, DH2U and I watched Sharknado 3. 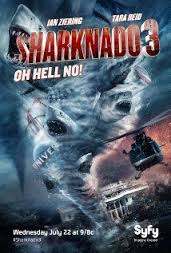 I have absolutely loved the franchise from the beginning. This is B movie greatness. While DH2U could have lived without having seen any of the three movies, I was all excited about this latest installment finally being available on Netflix. I found it hilarious that, with me being me, I never would have noticed that there was a different actress playing the role of the daughter if they hadn’t kept making references to her hair color changing. The Sharknado films have morphed from trying to take themselves seriously to being cameo-filled, tongue-in-cheek fun.

I’ve seen more than one franchise that turned funny as the series continued. Ms. M and I saw Expendables 2 before we saw the first one.

I’m glad I saw them in that order. While the original Expendables was a regular action film, the second one was a comedy – and a fabulous one at that. I loved watching all the action stars appearing, especially Chuck Norris. If you haven’t already seen it, please do. It is funny and clever and Jean-Claude Van Damme plays an excellent bad guy.

Then, of course, there was Star Trek IV: The Voyage Home.

Ma, Tom and I saw that on Christmas Day the year it came out. What a blast that was. Star Treks occasionally have funny moments, but this one had more than more than its fair share of humor, primarily of the fish-out-of-water variety. And Spock cusses!

I think it was the unexpected change in tone of all of these movies that made them so memorable.

Is anyone else loving the Sharknado franchise? or What has been one of your favorite sequels?