The first time I heard the story of the Prodigal Son I was in Sunday School. For a brief recap, after having blown his entire inheritance (which he had the nerve to ask for before his father’s death), the younger son returns home begging. His dad welcomes him home with open arms.

The dutiful older son, who had done everything right, was supposed to celebrate the return of his younger brother who had been off being irresponsible while he was toiling away. This older brother was, in my little kid (and my current) perspective, understandably pissed.

[Author’s Note: Perhaps some of my more astute readers were able to catch a slight bias that I allowed to slip in to that recap.]

The Sunday School teacher tried to explain to me that it was showing the need for forgiveness. While I wasn’t so bold as to ask then, what I thought REALLY loud was, “If you are doing what you are supposed to, you don’t need forgiveness!” Yes, I really was that much of a rule follower.

This was not the first time, nor the last, when I completely missed the point of the lesson. But hopefully it does show my underlying point: doing what is right is important to me.

Whenever I have been at job interviews, and they’ve asked for three words to describe myself, “responsible” is always one I give. I take great pride in that.

Despite all of this, though, I know that expending energy and putting in hard work, essentially being a responsible grown up, doesn’t always end up with the positive results we want. In trying to find employment during my first year in England, I submitted more than 200 resumes, received only five interviews, and ended up with no offers. That was devastating. I felt like a failure.

In that first year-long round, my skill set wasn’t ready. I wasn’t the candidate anyone wanted. Two important qualifications (my degree and my professional certification) were pending PLUS I needed Visa sponsorship. No matter how much I put myself out there and did all the right things, those were obstacles that would have been nearly impossible overcome.

Does that make me feel closer to the prodigal son? Heck no! He was irresponsible! I was simply fighting a losing uphill battle.

A very un-Tammy-like quotation helps me when life is seeming to be against me. It is from Babylon 5 (I am that big of a geek to have seen every episode!). 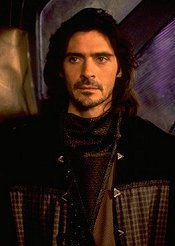 The character Marcus showed me a new way of looking at the world during these times:

I used to think it was awful that life was so unfair. Then I thought, ‘wouldn’t it be much worse if life *were* fair, and all the terrible things that happen to us come because we actually deserve them?’ So now I take great comfort in the general hostility and unfairness of the universe.

It doesn’t mean that I don’t work my butt off for what I want. I now have a better strategy for coping with it when I get punished instead of rewarded for my efforts.

Was the Prodigal Son story upsetting to anyone else? or What word do you think best describes you?