For many people, myself included, we go on vacation to get away from it all, or at least to trade in our “all” for someone else’s. To me, the process never seems quite complete, and I was able to figure out why: I keep bringing myself along. When I’m in new exciting places, I still have my same preferences and many previously unidentified expectations.

I discovered this early in my time spent in England with frequent jaunts to the Continent. Knowing that I was going to continue to be myself, I decided to find ways to give my trips more local flavor.

As I previously mentioned, I typically stayed in hostels, both to have company and to spread my travel money. I normally had a couple things I really wanted to do in each city I visited, and the rest of the time was free to explore.

Another benefit of hostels is that they all provided continental breakfasts, which would keep me going for a while. Not caring to eat around cigarette smoke, I normally would stop at a street vendor for lunch. I always chose the ones frequented by people in business attire, and I was never disappointed. 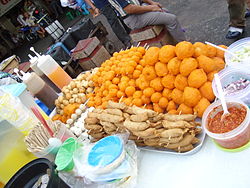 For dinner, I would normally pop into a corner market and pick something traditional, at least for the first night: In France, it was a petite baguette and some Camembert;  in Milan, it was a ready to eat meal filled with fabulous greens and carrots; and in Stockholm, I went to a very busy pizzeria and ordered the veggie option – which had corn on it and was remarkably good!

One thing I learned is that if you want to eat on the cheap, make spaghetti in the hostel kitchen.

I’ve eaten spaghetti in nearly every country in Western Europe. While it might sound pedestrian, I was so surprised at how different the jarred sauces in each country taste. None was as sweet as the American varieties. Some were a bit spicy (then again I’m a heat wimp), others tasted remarkably fresh and quite strongly of tomatoes, and others had seasonings I couldn’t quite place but thoroughly enjoyed. With each stop, I so looked forward to this bit of local color.

Do you have a go-to meal that you like to compare when you travel? or Have you ever wished you could leave yourself behind and experience things through the eyes of people who live there?

4 thoughts on “Spaghetti Around the World”