After thirteen years of having a fabulous Driver’s License photo, the DMV decided I couldn’t simply send them money this renewal.  I had to have a new picture. So, I diligently studied The Middle Ages blog post about posing for a candid photograph.  I love these ladies!  They are so self-depreciating and really insightful all at the same time.   I practiced the entire morning before my appointment.  I was set.

I arrive at the DMV twenty minutes before my appointment time, only to find out that “appointment” is a misnomer with this agency.  It only means that I get to wait in a separate line that will take approximately 10 fewer minutes than if I simply showed up.  That was frustrating, but waiting for my number to be called was like waiting for my lotto number to come rolling out of the shoot.  I was all happy and bouncy when I went up to the counter.  I paid my money, failed the eye test for the first time without my glasses but passed with them on (never had the corrective lenses box checked before now – bummer!), had my thumb print taken, and then I was sent to the picture taking station.

While I waited in that line, I noticed that everyone went into the booth, had one shot taken, and then they left.

Finally it was my turn.  I went into the booth, was startled by how scary the big camera looked, smiled as I practiced, was blinded by the flash, and then heard, “Um, let’s try it again.”  Not a good sign.  I took a deep breath, smiled, flash, and then, “One more try.”  Ugh!  How bad must these be if the DMV is giving me a do-over?!?!?!?

Here was my final attempt. 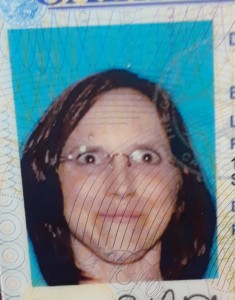 Psycho serial killer!  With my luck, this will be the picture that I have for the next dozen or so years.  [Author’s note: this is in no way a reflection of the picture taking advice from The Middle Ages!!!  I blame it on the terror-inducing camera and the picture-taker’s frown.]

In the past I would have been absolutely mortified by this bad of a picture.  I would dread each time I got carded.  I’m so glad fate dealt me this when I’m at a point in my life where I find it hilarious … and love to get carded!!!!  OMG – Wait, this is part of my permanent record!!!!!!

A few weeks later it arrived in the mail.  It was as bad as I had remembered from the quick glance I got of it before leaving the DMV.  I showed it to DH2U.  His first thought was, “you look like the woman on SNL that always plays slightly crazy.”

So later I realized the advantages: If I’m ever a fugitive from justice, they will use my driver’s license picture, and no one will recognize me from that!!!!  DH2U’s response to that was, “But if they do catch you, everyone will automatically think you’re guilty.  Remember the Nick Nolte mug shot?”  Very quickly thereafter: “But your pictures isn’t that bad!”  Nice save!

It does help to know that I can occasionally still get a good picture of me.  Also, my friend who coined the term Adventure Girl is currently painting a picture of me.  Here is his first sketch up.

I must admit, though, it was really hard for me to choose the bad picture as the main picture for this post (on Facebook at least.  I don’t know what the RSS feed chose or how to determine that) when I had two others that are SOOOOO good. Choosing a good one would have been counter to the spirit of the post of owning my bad picture and would have been a big chickening out.  I’m glad I found that courage.  The bad picture is not a reflection of me as a person. In way of compromise, while I do have the maturity to own the bad picture, the painting is definitely the image of me I would prefer to leave you with.

Who else out there has horrible pictures on their government issued id’s?  Or what things in the past would you have been mortified about that you now find funny?